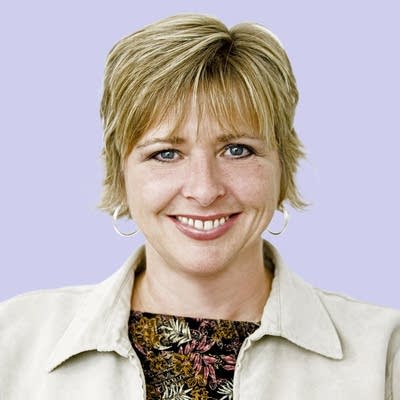 Julie Amacher's desire to introduce others to great music is what led her to radio. She began her professional broadcast career at a station in Sun Prairie, Wis. She went from rock 'n' roll to the Rocky Mountains, where she found her niche in public radio at KUNC in Greeley, Colo. Julie spent 13 years at KUNC, where she managed the announcers and their eclectic music format. During that time, she earned four national awards for best announcer. She joined Minnesota Public Radio in 1997 as an on-air host and also produces New Classical Tracks, a weekly podcast critiquing a new release each week. It airs locally at 7:15 a.m. Wednesdays and 5:15 p.m. Fridays.

Favorite classical music quote:
"Never compose anything unless the not composing of it becomes a positive nuisance to you." — Gustav Holst

First music recording you ever owned?
Actually, the first album I can remember really being enamored with was one my sister bought when I was 11 — Cat Stevens' Tea for the Tillerman.

How did you get involved with classical music?
Virgil Thomson put it best: "Try a thing you haven't done three times. Once, to get over the fear of doing it. Twice, to learn how to do it. And a third time to figure out whether you like it or not." That's pretty much how I came to classical music. I just kept trying it. First as a kid sitting on the piano bench listening and singing as my mother played all kinds of music including classical. In high school, I finally started taking voice lessons. That's when I discovered art songs by composers like Franz Schubert. Before coming to Minnesota Public Radio, I worked at a public radio station in Colorado that included classical music in its eclectic mix. Since coming to MPR, I've really immersed myself in it.

If a listener were to go for coffee with you, what's the first thing they'd learn about you?
That I love chai tea and chocolate! Usually when I get to chat with our listeners the first thing they ask is, "How do you come up with all those interesting things to say?" Well, I do a lot of digging. I'm really curious, and I know they are too, so I love digging for fun tidbits about the music and the artists who perform it.

Your favorite piece from the classical music play list archive?
Beethoven's Choral Fantasy (DG 453 798). Claudio Abbado/Berlin Philharmonic. Pianist Yevgeny Kissin. This is a piece that isn't heard very often, but for me, it epitomizes what Beethoven's all about. It starts off quietly, with piano alone, and gradually builds into a luscious precursor to his Ninth Symphony.